Visit the Cathedral of Palermo 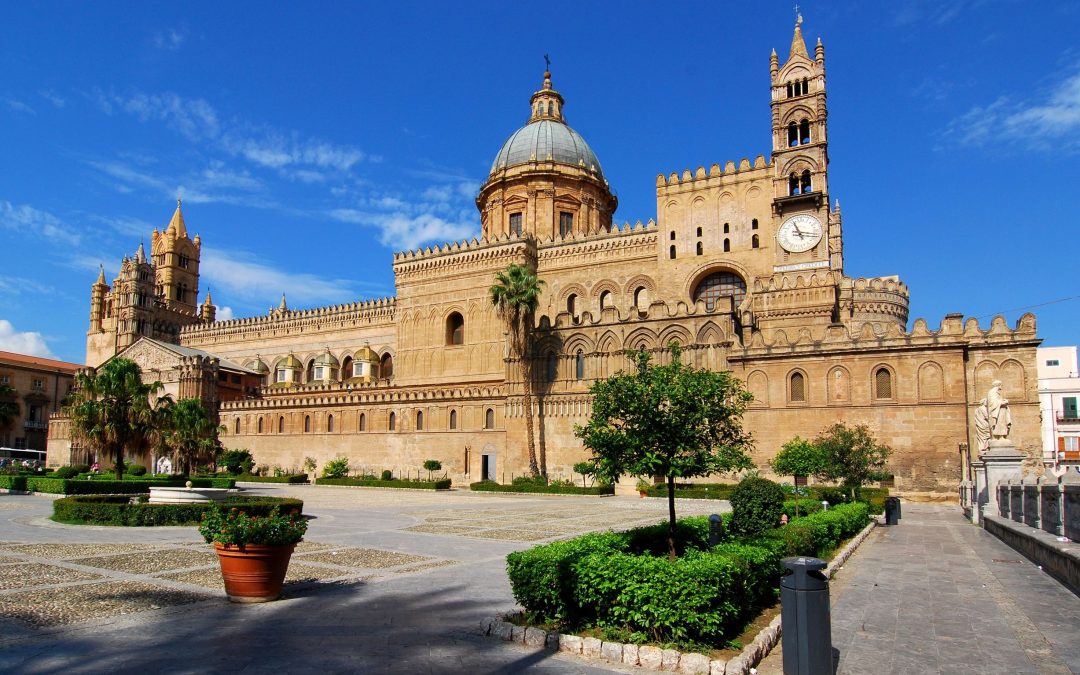 The Cathedral of Palermo is one of the most characteristic works of the city: its originality comes from the mix of shapes and styles in one architectural body, derived from different and multiple populations, over the centuries, took turns on Sicilian soil. 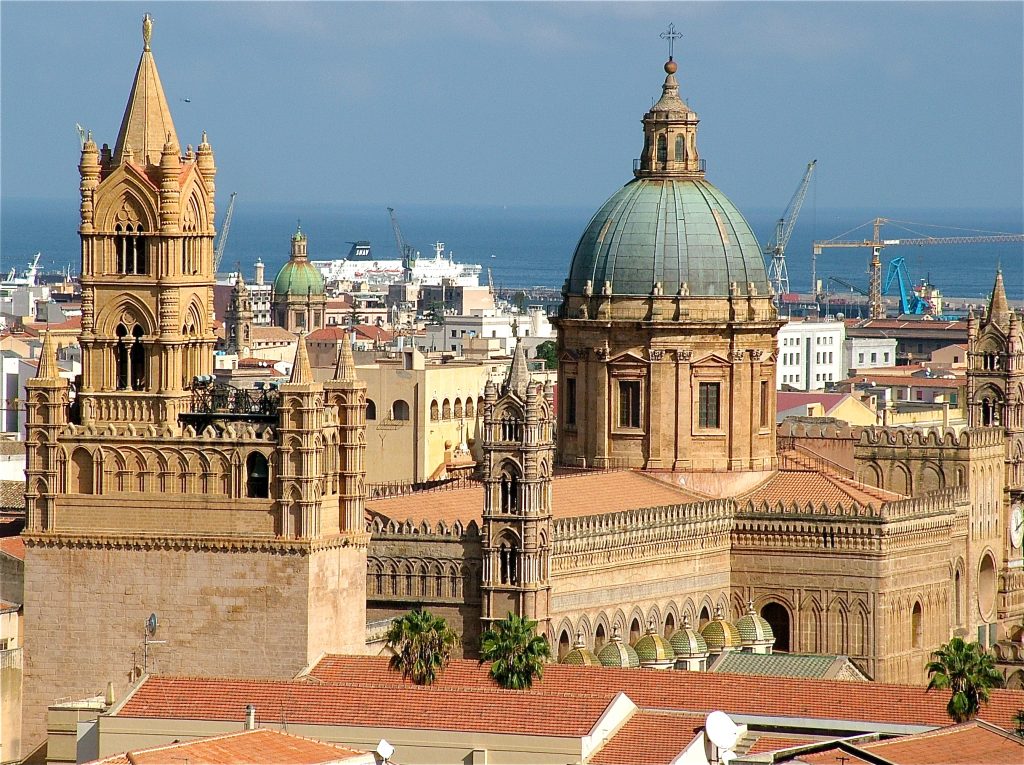 The whole city, with its history, presents a variety of forms and techniques including the Roman, Norman, Greek, Arab, with the addition of the Sicilian Baroque.

As a result, in fact, of the alternation of the actors in the political scene Palermo change the traditions, religious beliefs, mentality, with the result that different architectural styles merged all the structure of the cathedral, with the predominance, however, the own style of XII century: the Norman.

In truth, most of the changes and additions date from the eighteenth century: the plant of the church becomes, for example, of a Latin cross; the interior is brought back to the neoclassical model; a dome at the intersection of the side arms and the central nave (transept) is built.

We must add that these changes were not initially planned because it was thought only to reinforce the structure and to maintain the original structure; later, it was decided, however, to change the identity of the church through the most significant and noticeable change, ie, the creation of the dome: the intervention was designed by Ferdinando Fuga between the late eighteenth and early nineteenth century and diverges with the previous style of the church. In this period, it was decreed, unfortunately, also the elimination of the grandstand by Antonello Gagini which with its decorations and statues was a valuable ornament to the church.

As for the exterior of the cathedral of Palermo, it is embellished with four towers of the Norman type, with mullioned windows and columns, which are grafted along the four corners of the building, while in the south presents connection, by means of two pointed arches, with the Archbishop’s palace.

These features make the church look like a castle, and a symbol of the temporal power rather than spiritual.

On the right side of the church, however, an elegant porch overlooking a square, accompanied on either side by two towers and embellished by three pointed arches resting on columns in Gothic style, built in 1429-30 by Antonio Gambara. Bears in the eardrum, as well as decorations with floral motifs, even the shields and what the Senate of Palermo.

The plurality of orders not only architectural, is also evident from the incision present on the first column on the left of the porch is in fact engraved in stone a passage from the Koran, the result surely use the structure as a Muslim place of worship.

As for the interior, the Palermo cathedral has a Latin cross plan, with a series of columns separating the three naves:

– In the right aisle, two chapels, tombs of the kings and emperors who ruled the city are located. Among the most important, remember the sarcophagus of Frederick II and that of Roger II.

Of these tombs there is a legend: this tells the will of Roger II to be buried at the cathedral of Cefalu along with his entire family. He had also decided to build for his body of magnificent tombs in porphyry, a granite volcanic, very precious. In 1215, however, it seems that Federico II is appropriate graves and has held him and his father, Henry VI, making them carry from Cefalu to Palermo Cathedral. 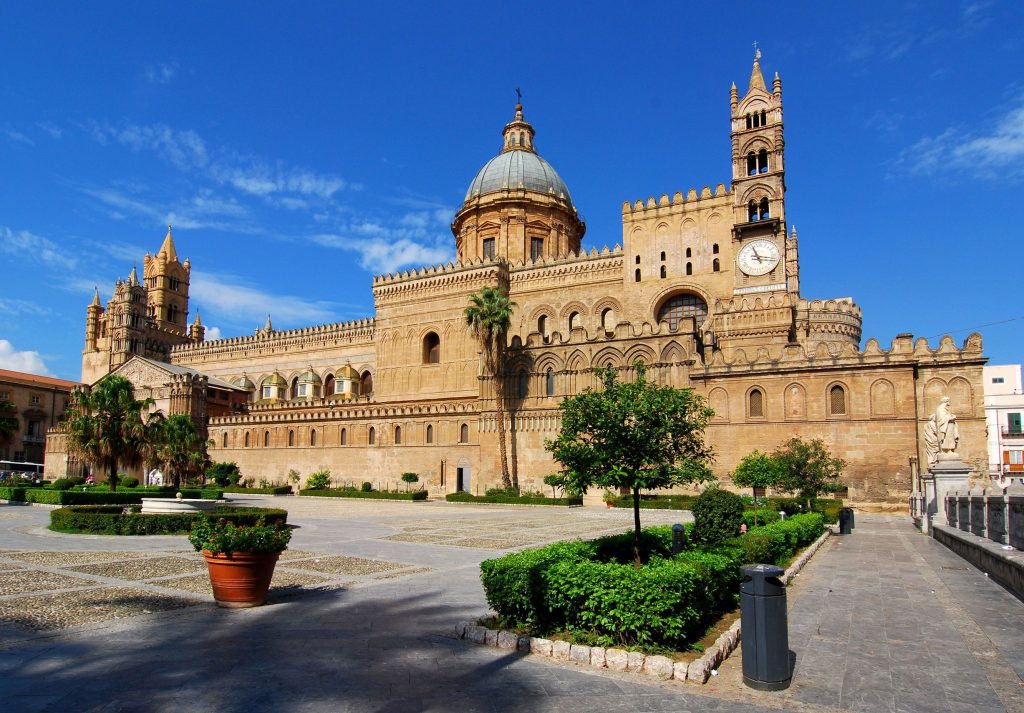 view of Cathedral of Palermo

They are preserved, also, at the Cathedral, the remains of Constance of Aragon, wife of Frederick II, and those of Peter II of Aragon.

The 1635 is the year in which it is completed the construction of the chapel of Santa Rosalia, the patron saint of Palermo. Situated along the right side of the cathedral, it contains the relics and the new silver urn, designed in the seventeenth century by Marino Emery.

The walls are reliefs in marble, neoclassical, Valerio Villareale, depicting scenes from the life of the saint: the entry of his relics in the city of Palermo and the prayer and invocation of Jesus Christ against the plague.

In the central part of the church, however, on the floor in front of the main altar, it was built a sundial by Giuseppe Piazzi.

Added during the last restoration, inaugurated the early nineteenth century, it is made of marble and features the colorful decorations that symbolize the zodiac signs. The sundial, following the movements of the sun along the various constellations, marks the entry of the same in the different zodiac signs.

There is also an environment in which they are arranged showcases, in which there are precious ancient objects: is the room of the Cathedral Treasury. In it are preserved sacred objects such as chalices and monstrances, vestments that date back to 1500, in addition to the gold tiara that belonged to Constance of Aragon and recovered from his grave, grandiose masterpiece of medieval goldsmith.

Finally, it must be remembered the thirteenth century mosaic of the Madonna; the remains of the grandstand Gagini; the statue of the Madonna with Child Free Sick of Francesco Laurana; and the lovely baptismal font that provides the figures of Adam and Eve in sorrow.