The cathedral of Monreale 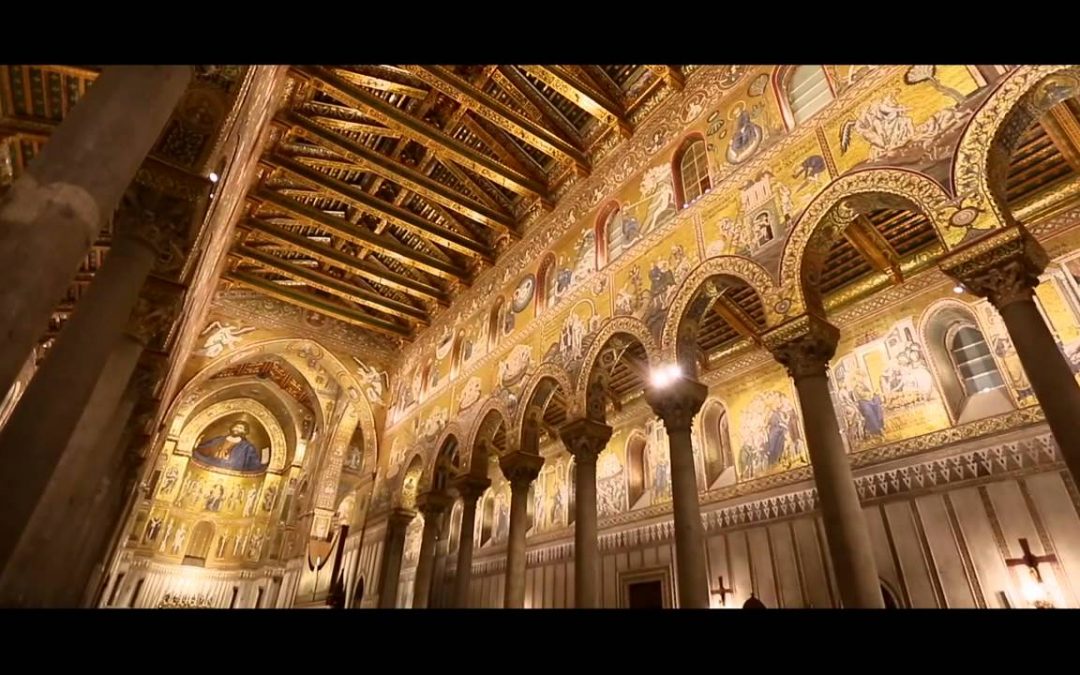 The Cathedral of Monreale is one of the most beautiful churches in all of Sicily, a masterpiece of Byzantine art not to be missed, with its fine mosaics famous throughout the world and more than 1800 kg of pure gold used to tell the story of Christianity. Since July 2015 was declared a UNESCO World Heritage Site, along with the Arab-Norman Palermo circuit. 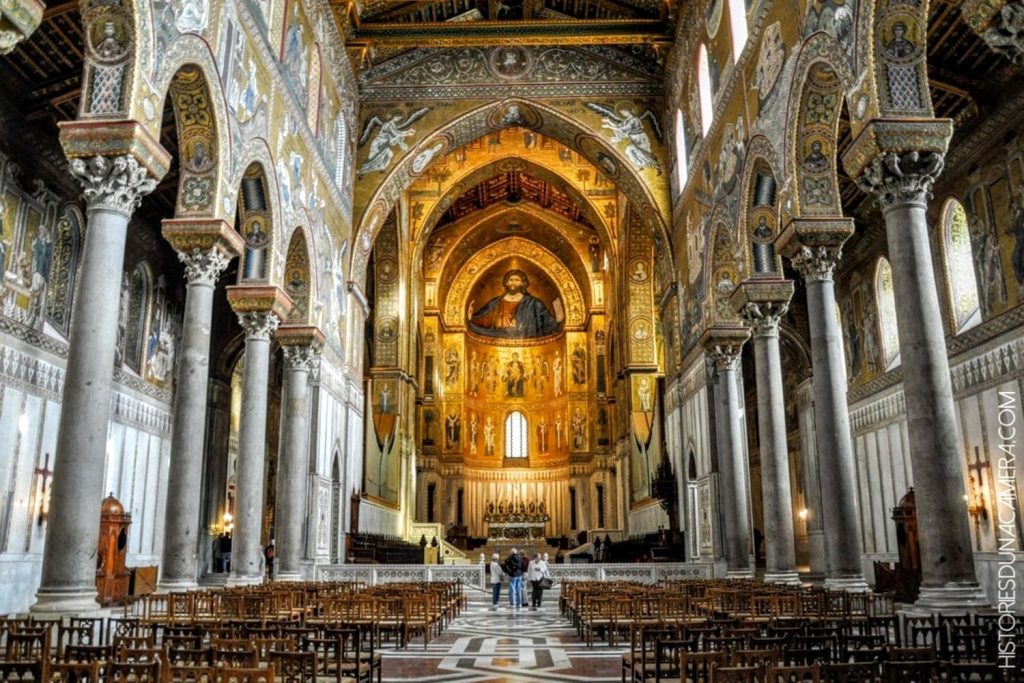 A very rich church treasure then. But as it was possible to spend so much money for its implementation? The story of its construction is linked to a famous legend and is intertwined in some way to the history of the construction of the Cathedral of Palermo.

It is said that in 1171 the Norman King William II, devoted to Our Lady, during a hunt was seized with sudden fatigue and fell asleep under a carob tree. That sleep, in addition to refresh his weary limbs, was the source of an incredible revelation. In fact, Our Lady appeared to him in a dream and told him that right under that tree he hid a treasure of inestimable value. When he awoke the king had cut down the tree, he dug deep and when gold was found decided to build a church in honor of Our Lady.

During the same period another major construction site was opened. In fact Walter of the Mill, then archbishop of Palermo, was building the Cathedral of Palermo. Between the king and the archbishop there was bad blood, and so both, overcome by delusions of grandeur and a desire to outdo the other, they did not mind the expense and indulged in phantasmagoric projects.

The end result was the following: the Duomo of Monreale has an internal spectacular and rich, while its facade is quite “normal”; Palermo Cathedral is an imposing facade with arches inspired by Islamic architecture, columns with statues of saints, bell towers, nuts, battlements, pinnacles, while the interior is rather simple.

The interior of the Cathedral

In the Cathedral of Monreale to a rather simple and linear façade contrasts with the interior of extraordinary beauty, a Latin cross, with its innumerable and very precious mosaics depicting scenes from the Old and New Testament. 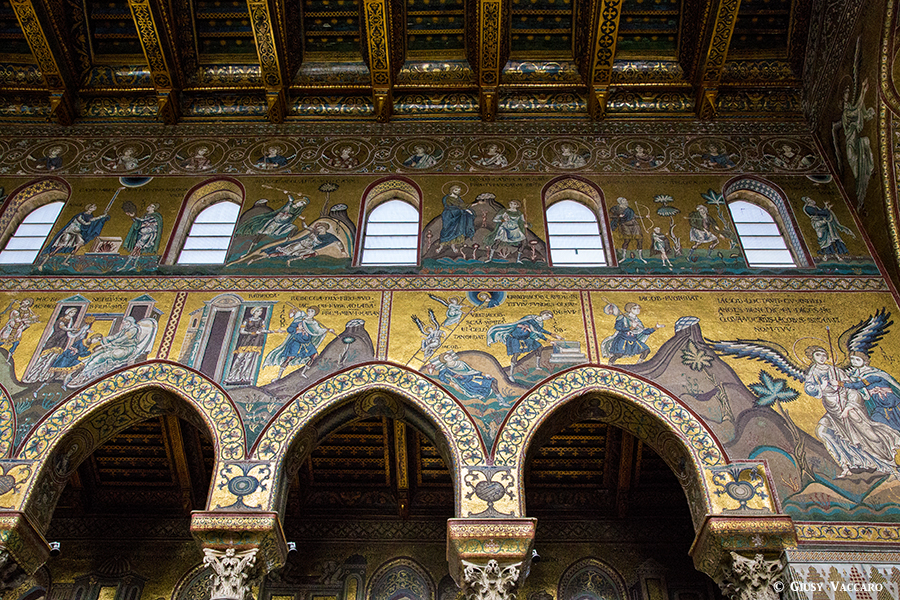 The interior consists of three naves separated by antique columns with Corinthian capitals, which support the arches.
The lower walls and the floor are covered with marble. The upper wall is entirely covered with Byzantine mosaics (created between 1179 and 1182).

christ-almighty-monrealeNell’abside dominates the imposing figure of Christ Pantocrator. Below they are represented Mary and the baby Jesus, flanked by the archangels Gabriel and Michael, then the apostles and other saints in the lower row.

In the nave, on the west walls, the mosaics depicting various biblical scenes of the Old Testament: the creation and the events leading up to the expulsion from paradise; the scenes are the moments of the life of Noah, Abraham, Isaac and Jacob.

In the south transept there are the tombs of King William I and William II, men 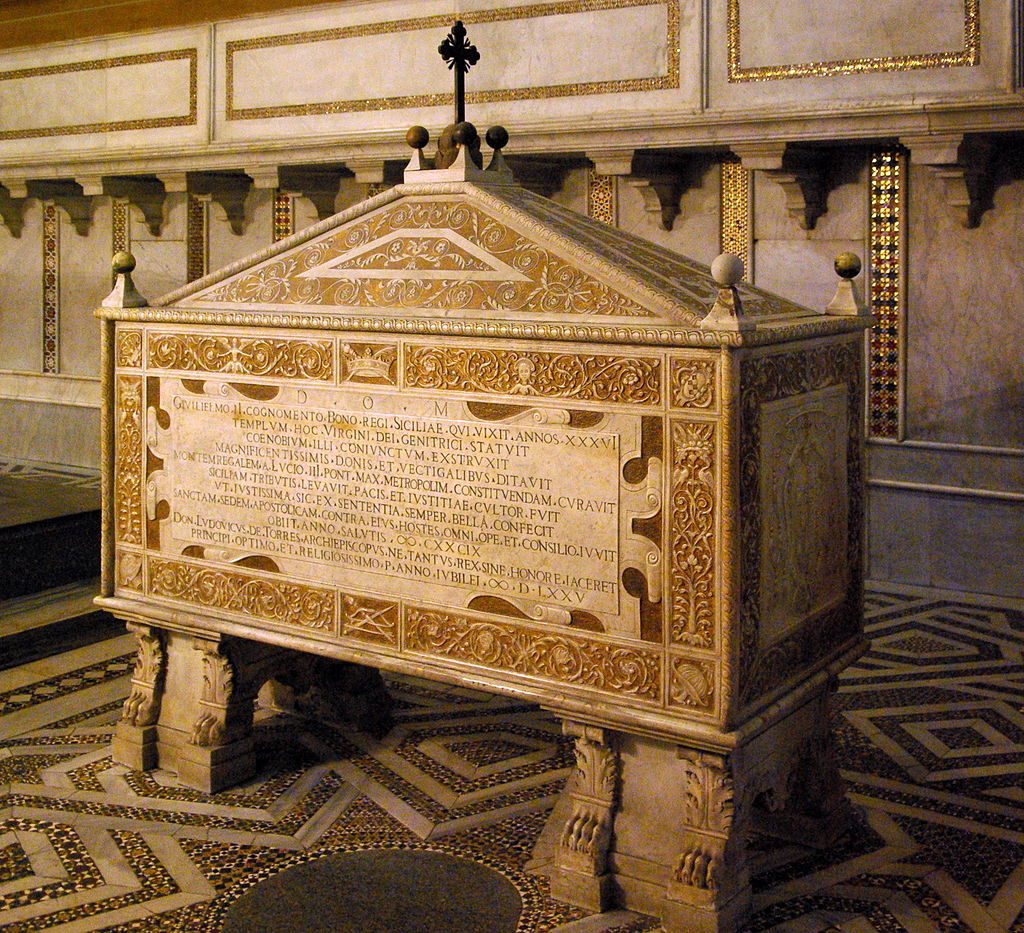 The cloister
The best place today for the final farewell from the Cathedral of Monreale, unquestionably, the arcade cloister of the Monastery, recognized medieval masterpiece. In fact, mancandoci the two ancient porticoed squares, west (main entrance of the citadel) and north (royal palace), tourists and believers who have just completed a visit of the mosaics can keep safe any risk of bad weather (rain, wind, snow) or scorching heat.di ogni rischio di intemperie (piogge, vento, neve) o di caldo torrido. 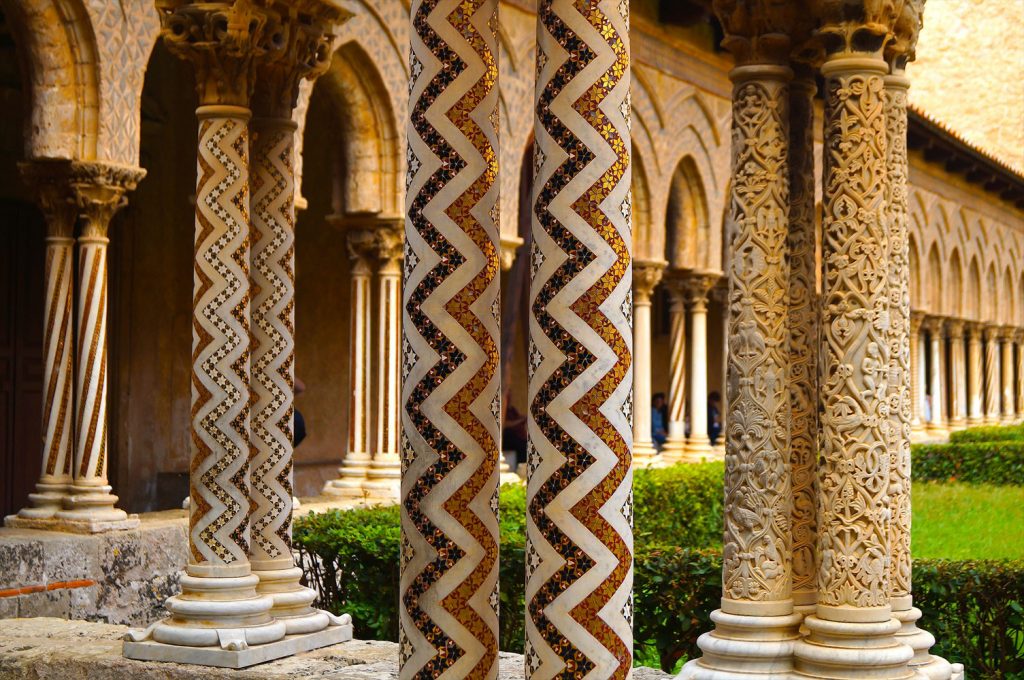 Like any monastic cloister the place is considered the center of the fast moving monastery in the various offices and, in the second instance, guarantees the primary need of artificial rainwater harvesting, with archaic efficient storage systems through tanks. Well, in the cloisters it has precisely this origin logistics.
From this point of view you will notice that the fountain and the well are not aesthetically placed at the center of the cloister, but more pragmatically, they occupy a corner, south-east, allowing the monks to draw water without having to face the sun or another type of seasonal difficulties.
Breathing, thus, the atmosphere of peace, tranquility, serenity, in a silence that cushions the buzz of working and traveling the world, we can briefly focus on some artistic and religious values that emerged from our visit.