The Ponte dell’Ammiraglio, a bridge to twelve Norman era arches visible from the current course of Palermo Mille, from July 3 of 2015 has become part of a world heritage site (UNESCO).

At one time under the arches of the bridge it flowed the river Oreto, in Arab times the river was called Wadi Al Abbas. 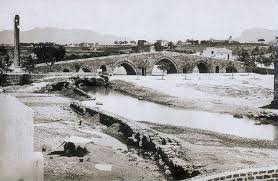 The bridge was built at the behest of the great admiral of admirals George of Antioch of the Norman king, Roger II of Altavilla.

A popular legend tells, that the place where they erected the Ponte dell’Ammiraglio, the Archangel Michael appeared to Roger I and with her help, conquered the city of Palermo, in the hands of the Arabs.

Before it was built the Ponte dell’Ammiraglio, a church was built and was named in honor of the Archangel, St. Michael. As time passed, however, it was demolished.

The Ponte dell’Ammiraglio architecturally is an example of medieval engineering, has a form humpback, built with blocks of seven arches squared tuff, Lancet and falling rings and five arches intermediate minor, to lessen the pressure of water flow on the structure.

The characteristic of the very acute arches, allowed the bridge of perfectly resist to very high loads, even in the maximum flow rate and water flow conditions.

Over the centuries the environment that surround it the bridge underwent substantial changes by man, these changes were determining cause of several problems and consequently the structure of the bridge was damaged several times. 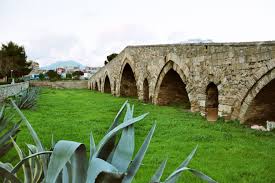 Over the centuries the environment that surround it on the Ponte dell’Ammiraglio underwent substantial changes by man, these changes were determining cause of several problems and consequently the structure of the bridge was damaged several times.

From the sixteenth century. floods were frequent, and again the Senate of Palermo had to intervene to repair the bridge. In 1775 the river was partially deflected, but the operation did not have a very good result. Only in 1938, after the great flood of 1931, the entire course of the river was diverted and totally isolated from the Ponte dell’Ammiraglio.